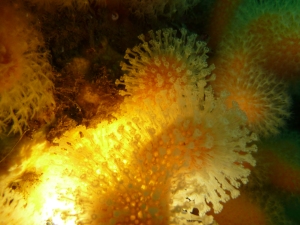 This past weekend we had the first trip of the year under canvas with the team gathering on Friday night from various locations and directions at the Scourie campsite.


A relaxed start on Saturday morning saw Spike’s boat and Deep Dancer being launched without incident from the cobble beach next to the Scourie pier and after a few last minute holdups we were away to dive Bogha Mor, a skerry off the SW tip of Handa. A low Atlantic swell was coming in from the NW which produced local breakers on the skerries and made for some exciting pickups but had little affect on the dive itself. Going in, in two waves, both groups reported initially poor visability which improved with depth but this was made up for by the life encrusted walls and stepped gullies which continued beyond the 30m mark. With crayfish and lobsters in abundance and a veritable nudibranch city, all wildlife lovers and eco snappers were happy. Steve and I found a gully as we dropped in and followed it as it stepped slowily downwards to the SW until we ran out of bottom time and made a free water ascent well away from the skerries.

Taking the scenic way home around the North of Handa for those who had not seen the cliffs before we moored the boats against Scourie pier to lunch back at the campsite. Unfortunately the tide was still receding and we needed all hands to udge the boats and refloat them.

Steve and I encountered this nudibranch as well, Tritonia hombergii which can grow to enormous sizes and are reportedly poisonous to the touch.

The second dive was a scenic site to the North of Handa, a wall and gully system just off a small 10m pinnacle that stepped down to 25m+. Paul described it as like the top of a muffin and we found this to be a good description. Spike’s boat dived further to the west and closer into the cliffs. Deep Dancer’s teams reported a mixed appreciation with low vis and poor topography “Granite city and B***** all life” to amazing gullies and Crayfish. For my part, diving with Steve we had another good dive, that was possibly even better than the mornings, finding a gully system covered in DMFs and teaming with wrasse, pollack, saithe (haddies) and an enormous ling sheltering in a crack, this was that big that initially we thought this was a conger.

After a few technical problems we decided to call it a day and recovered both boats from the cobble beach.

Saturday night Spike had suggested a meal out at the Kylesku Hotel and Lynda booked a table for 11 which is not a bad turn out. Great food and good service. The team retired to the Scourie Hotel having driven back to the campsite to allow the designated drivers to enjoy a pint.

Overnight it rained and the canvas got a good shake. With the sea around Scourie looking a little exposed to shore dive we opted for shelter in Kylesku and struck camp and went to check out the South slip. The tide was on the ebb and a strong current made diving difficult but all went in and reported varying degrees of enjoyment sighting various cars, bikes and crayfish. Paul and I decided to wait for slack water and had a pleasant dive to the bottom of the wall and out across the gravel collecting a bag of scallops before returning to the east and surfacing in the bay behind the toilet block. Just before surfacing Paul spotted a pipefish, which was very docile. This one was a male and was clearly brooding eggs.

To break the journey home, Paul and I stopped and had a bar-b-que at Rogie falls where the remaining sausages, burgers, bacon and a few fresh scallops were cremated. They were so tasty!