Steve, John and I attended the introductory Course on Foreshore and Underwater Archaeology on Saturday. As divers, we have a great opportunity to see both wildlife, buildings, artifacts and ships frozen in time, rarely seen by others; as the cold waters and sediments of our sea, lochs and rivers preserve a rich archive of natural and human history. We were lucky to have as our tutors Dr Nick Dixon and Barrie Andrian from the Scottish Crannog Centre, two Archeologists with a wealth of experience of both Maritime and Fresh Water Sites.

The first part of the course, provided an introduction to Underwater Archeology, different types of Sites ( Interesting to see that underwater sites compared to dry land sites tend to be richer in recovery and preservation of artifacts) and then after a break for Tea, we looked at Several of the Dating Methods used which split into Relative and Absolute such as Radio Carbon 14 Dating and Dendrochronology ( Tree Rings) and then a brief talk about the Legal aspects of Visiting Wreck Sites and recovery of Artifacts.

After Lunch we broke into groups for a talk then practical demonstration of 2D survey methods then a dry run inside before venturing outside into the water to try out the methods in Loch Tay.

After not doing too badly in the warmth of the centre, we tried doing the practical in Loch Tay next to the Crannog, Nick suggested that for shallow diving of 1-2 metres he
Doesn’t use fins in the water to reduce the risk of kicking up silt and artefacts, so I thought I would give it a go, the key is to be slightly over weighted, then be head up at a 10-20 degree angle using your toes and hands to move slowly around the site.

Definitely enjoyed the experience, and as a one day introductory course it had a good mix of theory and practical. 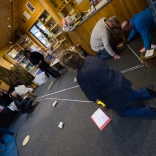 Having a go at the Trilateration Technique 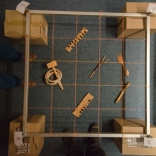 Using a Grid to record artefacts 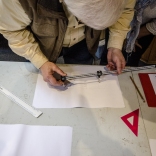 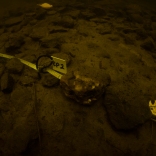 Setting up control points and a base line 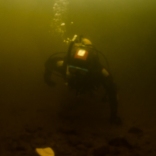