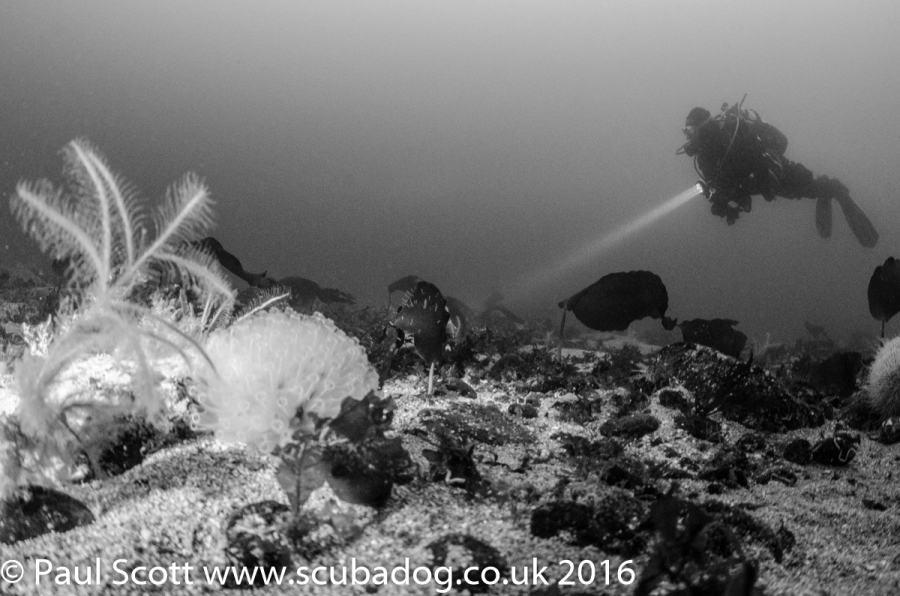 Steve and I had been planning to do the Meldon for several months now and the opportunity came up.

So Paul, Steve, Gary, Izzy, Mark and Taylor headed out at 9am on Deep Dancer, our Club Rhib, from Puffin Dive Centre near Oban. The trip in good seas takes about 40 minutes and is 15.4 NM, in the morning we had calm seas although we were aware of the Rain and Cloud Forecast for the rest of the day.

The Meldon is a great wreck for Novice / Ocean / PADI Open Water divers as there is little or no current on her and she is a relatively intact wreck. The Rudder post breaks the surface at low water and there is lots to see including the Cast Iron Propeller and Rudder, Boilers which are open on the Port Side and the Bow which has fallen over but is very scenic, surprising to see when you consider that she would be exposed to Winter storms from the South.

The Meldon Launched in 1902 at Newcastle is a 1572 Tonne 310 ft Long Steamship, Steel hull construction. On the 3rd of March 1917 while carrying a cargo of Coal from Wales she struck a mine in the Firth of Lorn laid by a German U Boat. The Captain headed for the south Coast of Mull where the Crew got off the boat, she sank with the Stern near the shore, perhaps the Captain thought he could save the ship and was making repairs before a pump failed? 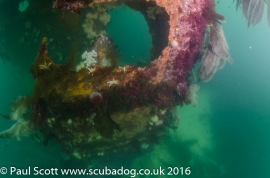 The Rudder of the Meldon Wreck Mull

Wrasse swimming around the Propeller of the Meldon

The Stern of the Meldon Wreck

Fish hiding in the Top of the Meldon’s Steam Boiler

The Bows of the Meldon Wreck twisted to one side

The Boiler of the Meldon Wreck south of Mull

Perhaps the Remains of Decking on the Meldon

Collapsed hull structure of the Meldon, near the Engine Compartment.

Pollack near the stern of of the Meldon

Diving the wreck there is broken shell coarse sand around the wreck with plenty of Sugar and Forest Kelp covering her, on the Stern section she has Elegant Anemones and Dead Mans fingers. The Visibility was about 6-8 metres and you could see she is home to Ballan Wrasse and Pollack, this wreck is 300 ft long and towards the bows section she is more broken up. Definitely a pretty and enjoyable wreck, easily covered in one dive and if we’d have had bright sunlight the wreck would have been a lot more colourful too.

We headed further along the coast to Carsaig Quay for a picnic stop, the clouds were low and a steady drizzle coupled with Midges didn’t make this an ideal stop.

Although in better weather we would have a chance of spotting Eagles hunting on the Southern Slopes of Mull. We Dived the Fish Trap Just South of Carsaig Quay as a second dive which was a gently sloping reef dropping to sand at 20 metres.  Gary and Izzy found an Octopus on their dive. With the Tide and Swell changing Deep Dancer was slower on the return run to Oban taking about 1.15 minutes. It’s great to get out and find new dive sites.