First thanks to Steve for organising the Easter Trip our traditional event to kick of the summer dive season.  On the Friday Chris and I did a couple of productive dives with  a first dive collecting a few Scallops for Tea and then a wall dive off Bach Island just to the South Of Kerrera, this wall tends to be hit by strong tides on the Ebb, but is protected during a Flood tide.  The wall was dark with lots of sediment / plankton in the water but worth it as it is covered in Elegant anemones, Dead Mans fingers, Colonial Sea Squirts, and we saw a few Flabellina pedata and other species of Colourful Nudibranch, nice and worth braving the 7 degrees Celsius water. 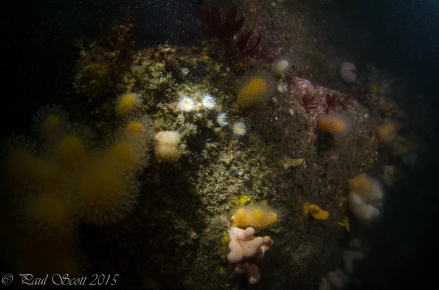 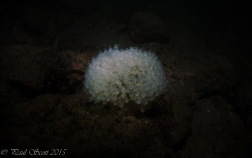 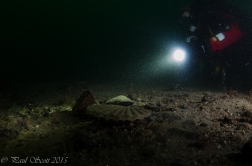 Sunday Diving –  John and Eddie two of our Ocean Diver Trainees enjoying lunch & the View of Mull on the Island of Kerrera.

06:00 am, What! Another early start ! It’s that time of year when dragging yourself out of bed while it is still dark to go diving is a real test but we did well arriving on time at the club shed to load the boat and set off for Oban. The objective of the day was to firstly get some diving in and to allow Neil to complete his Dive Management practical session.

Plans were a little fluid this weekend with a couple of people coming down with colds and back problems but such was the turn out that we still had a full boat , a good chance to get Deep Dancer out and exercise her engine putting in some time on the water. Of course the first problem was starting the engine which was reticent to say the least, still we are getting very adept and cleaning the plugs, ululating and rending cloth before Paul laid his hands upon the console and she coughed into life. With a boat brief and radio check completed it was time to get the show on the road! So a couple of extra checks to ensure the gear linkage was secure and that we could stop and restart the engine and we were away.

The trip down to Insh Island was rough and Paul did a good job punching his way through a nasty chop to arrive at the northern end of the Island. The small Island and the skerries were not an option today due to the swell and waves but there was sufficient shelter in the little bay to the NE of the Island to allow safe diving. Chris and Euan were first in and found a sandy bottom, good for a few shells but not of great interest. The visibility was reasonable though a fine sand stirred up easily the tide then drifted it with you so you had to continuously move out of the silt trail you raised. The divers found themselves in an eddy and having tried to go south in the direction of the tide eventually gave up and drifted North where the current took them. Towards the end of the dive they reached the reef that joins Insh to the Northern skerries where small walls provided a little interest. Unfortunately the current meant that the dragging an SMB stopped the divers sheltering in the kelp and they surfaced slightly earlier than plan. Mo and Fred went in in a similar place and reported a reasonable dive within the bay, having a good long dive and making a safe ascent. A quick change over on the boat and the dive manager sent the next wave in who followed the edge of the reef taking a few photos and picking up the occasional scallop.

With a full team recovered we decided to head back to Puffin dive center rather than go across to Easdale for lunch as the afternoon was chasing. The trip back proved to be one of the great highlight of our diving this year and goes to show that diving off boats is about the day as much as about time in the water. Half way back the shout went up ‘Dolphin’ and we throttled back to watch. Initially a few animals were surfacing and we weren’t sure how many there were, three or five perhaps. Clearly something was going on and as we watched a tight group started splashing about with much tail waving, a smell of fish suggested they could have been feeding but it was most likely that the smell emanated for the old diver that we keep in the stern of the boat. However the splashing was only the prelude to the main act , dolphins started to jump with supreme grace and it was slight disappointing when the school drifted away from us. With everyone enthralled we set again towards Puffin but the dolphins decided they had not finished with us and started jumping, easily clearing six or even eight feet out of the water. Initially in ones and twos, some right next to the boat and then in synchronized form giving us the kind of show you would have paid top dollar for in Orlando. Here it was off the West coast for free !

A much easier passage back to Puffin followed, with a following wind we made better time and having secured the boat spent a leisurely hours over lunch, ‘grilling’ the Dive Manager on his theory (he he he he!).

Ardnachuil bay was the next site, a short ride from Puffin and while not calm, a safe option. Chris and Euan were in first and having bushwacked their way through the swell and the kelp, found a sand and gravel slope disappearing off into the depth. Chris reported a couple nudibranchs with dendronotus-lacteus and it’s brilliant white body easily spotted standing out on a brown kelp frond and being a new one for him. (No camera today so I’ve included a link from the Scottish nudibranch site – Ed) later in the dive, they also found a small red sea hare, perhaps the smallest one, you could possibly imagine being less than half a centimeter long. Mo and Fred reported a short dive, struggling to get out of the kelp in the challenging swell they encountered. A good effort in challenging conditions and as it had a safe outcome merits a success in my books.

With the second wave of divers in the water, the opportunity for a bit of boat handling skills development was presented and man over board and indeed board overboard skills were practiced before standing on station over the divers waiting for them to surface. Paul and Steve surfaced and having had a stern debriefing from the Dive Manger they were allowed onboard before we departed for Puffin. Well done to the Dive manager there for demonstrating control over the group! The boat was recovered and kit washed down on the slip and with a final debrief from Neil the day was wound up with the boat heading off to the club store followed by Chris and Euan.

Congratulation go to Neil for successfully completing his Dive Manager practical as part of his Sports Diver grade training, he did exceptionally well keeping control over some experienced divers with an accumulation of years of bad habits. The committee have yet to validate his qualification level but I look forward to diving with our newest qualified Sports Diver in the not too distant future.

Thanks to Steve for organising another successful days diving and to Paul for towing Deep Dancer. 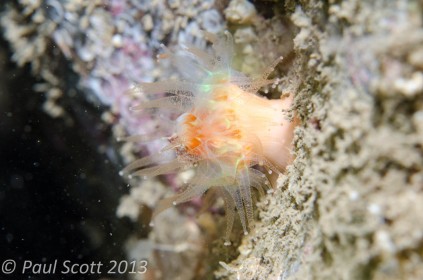 Alan and crew were out again on Sunday and a very good and varied trip it was too. From Puffin we headed south to Insh Island on light seas and had it not been for a slight headwind they would have been flat calm.

The first dive of the day was on the NW of Insh Island where we dropped onto kelp and sand in 12m before venturing out onto a gravel bottom to 25m where a good bag of large scallops was collected. No dredging is allowed around this area so the bottom is not disturbed. Visibility at 20 m was very good but there was a significant oiliness to the top few meters of the water which we crept into as we ascended boulders and sand at the end of the dive.

For lunch we cruised around Insh Island and made for Easdale where we met Tony and his Wife (former members) who invited us across to the island for a coffee, a natter and few of the local stories. A great opportunity to have a walk round and check out the pub and coffee shop as well as the amazing harbour carved into the middle of the island by the quarry men.

The second dive was superb, probably one of the best dives in the area. Heading back toward Puffin on the NE side of Insh and under Dave, the island owners home, the small skerry of Sgeir Bheul na h-Uaimaidh sits on one side of a small channel that gives an energetic drift under the small cliffs. We were dropped on the outside of this and the initial shingle and kelp gave way to rock and then a wall that was covered in sponges including the snow drop sponge, yellow fingery sponges, grey perforated sponge, cup sponges , vase sponges and a hundreds more. We did not however see the Northern Sea Fan at this site. Jewel anenomies of fluorescent green, sandaled anenomies and the ubiquitous deadman’s fingers all over. Looking closer, top shells and even a small nudibranch could be found. Finally, bottom time ran out so we ascended onto the shingle and kelp to put in a safety stop before ascending. The second wave went in where we came out and worked their way back, reporting another good dive and another bag of scallops

The journey back to was swift with Alan at the helm and dolphin sighted. A great day with at least one top class dive.