I organised a trip down to Coldingham and St Abbs to show some of our newer divers what the Berwickshire Coastline has to offer.

We have been lucky previously with trips on the West Coast including Skye, Summer Isles and Handa Island so thought I’d try and see if we could have some luck on the East coast. There had been a strange weather pattern with weak systems sitting over the UK and a Large Low Weather System (later to cause the near flooding of the Louvre in Paris) moving over Mainland Europe and then heading slowly North which was threatening to bring in Northerly cold weather to the East Coast. Fortunately for us the winds calmed down on the Thursday night to 5-6 mph but I wasn’t sure of what visibility we were going to get.

On the Sunday morning we decided to do a morning dive on the Glanmire a steamship that ran aground on St Abbs head on the 25th July 1912 in poor visibility. After all the crew and passengers were rescued she drifted off the Rocks and sank a few 100 metres off the Lighthouse. The Glanmire sits in 32-24 Metres depth and the hull has opened up to show the two boilers and large steam engine.

So, after coordinating with the local dive skippers we used the permanent shot which is positioned a short distance from the boilers to descend onto the wreck.  With it being neaps this also gave us a bigger slack window to dive the wreck.

Normally for me I’m used to 6-8 metres visibility on the East Coast and was amazed to find I could see the wreck laid out from a depth of 14 metres. With a cold start to the year and water temperature of 9 degrees Celcius, the Algal Blooms hadn’t hit us yet and we were fortunate to get 20 metres vis. The Glanmire was stunning, you got a real feel for the size of the wreck (1141 Tonnes Gross) which had a mixture of Wrasse and Pollack on it, I didn’t see any schools of Saith yet, later in the Summer perhaps? The wreck was covered in Deadman’s Fingers, a few Horseman Anemones, Spider Crabs and Lobsters and Edible crabs hiding in the plates of the wreck. 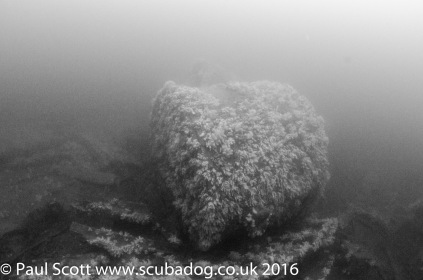 Wreckage of the Glanmire St Abbs May 2016

Deck handrail of the Glamire Wreck at Saint Abbs Head

Engine and Propshaft of the Glanmire Wreck St Abbs

One of the Boilers of Glanmire and its original Mounting Bracket 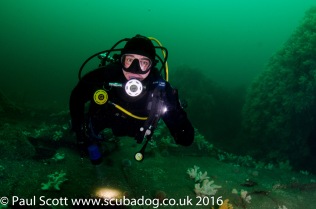 Hayden on the Glanmire Wreck 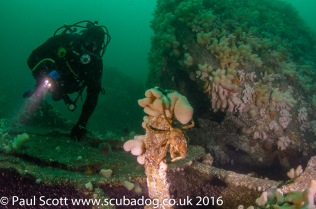 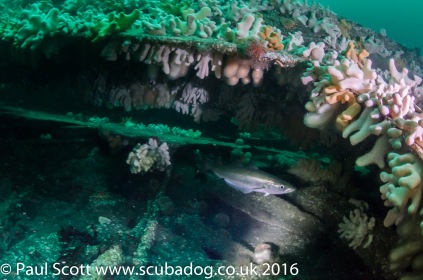 Last Shot of the Glanmire 20 metres below on the Seabed

Looking up from 6m Decostop on the Glanmire Wreck St Abbs

After heading back to St Abbs for lunch the second dive was to be Cathedral Rock only 2 minutes in the Rib from the Harbour. This dive is potentially best done at low tide as the rocks are submerged at high tide and the Charts on Navonics or Garmin are no help.  At high tide only Little Green Carr breaks the water and the Rocks that form the Reef, which include Cathedral Rock, are approximately 30 – 40 metres to the south of Little Green Car. Be careful, Cathedral rock is the 2nd Rock in and from memory should line up on a 120ish bearing from the Gully that comes out of the Harbour wall, and yes you can do it as a shore dive.

We dropped Steve and Ben then Hamish and Eddy near the rock first and thankfully I had got it right, had been a few years since I had dived here, phew! Hayden and I dropped in on the 2nd wave and I’m glad I had sorted out my strobes and Lens as one of the regulars, a Ballan Wrasse, popped over to say hello.  I then took Hayden on a tour of the Arches, looking at the mixture of Anemones covering the ceiling of the arches and the pool of air caught in the roof of the second arch (Reminded me of the up turned Bath at Dorothea Quarry, that frequented the top of the tunnel) before exploring East to find any reefs. Returning back to Cathedral rock from the East we were met with amazing walls of Dead Mans fingers.

The comment from Hayden was f***ing awesome which I assume meant the second dive was even more spectacular than the Glanmire. You can’t beat British diving at its best! 🙂 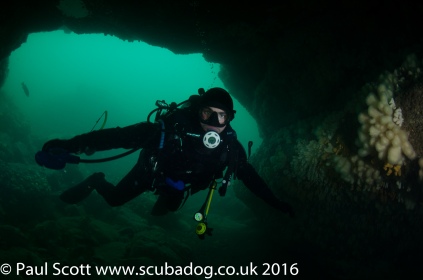 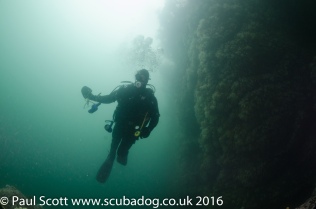 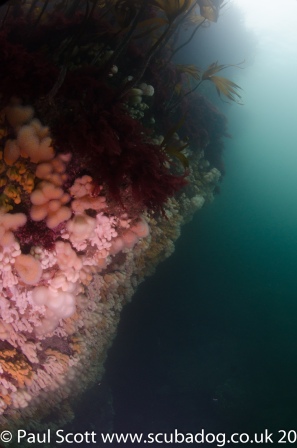