We had organised several trips to the Bell Rock over the last few years but due to poor weather plans had changed.  The Bell rock is a almost submerged red sandstone reef approximately 12 miles off Arbroath.  The Bell Rock lighthouse was designed by Robert Stevenson for Trinity lighthouse and completed in 1811 the same foundations are over 200 years old. which is impressive when you see that the Lighthouse is constantly being besieged by the seas.

We headed out from Anstruther on the Mako, a hardboat owned by Steve Haddow to Dive the SS Ugie a steamship Trawler which sunk on the 16th March 1900 after a collision with the Dundee Trawler Taymouth then travel onto the Bell Rock for our second Shallow dive on the reef.

The weather was in our favour and after Steve put in the Shot we noticed that the tide was still running but need to keep to a tight time table, Derek and I were the third Pair of divers in the water and after a long swim to the seabed. The shot had dragged off the wreck and after a 100 metre swim against the current we reached the midships of the the wreck in 34.5metres to the seabed.  The Midships of the wreck was broken up but you could swim inside the hold and then we headed towards the Stern of the wreck she is covered in lots of life including a few large Lobsters,  The Ugie is about 130 ft long according to Bob Baird but we only had a short window to explore the stern section.

We headed across to the Bell Rock enjoying the sunshine and calm seas.  After a cup of Tea Derek and I dropped in to dive the Reef and the remains of the HMS Argyll which struck the Bell Rock in a Storm on the early hours of the 28th October 1915, all the crew were rescued which included a heroic effort by the Lighthouse keepers. After being blown up by the Royal Navy she was heavily salvaged and in the summer of 1970 the two massive manganese-bronze propellers weighing 14½ tons each were recovered by the Local Condor Sub Aqua Club.

Most of the reefs are covered in Kelp and the average depth varies between 9 -13 metres we found some plates and ribs as well as a , Gary and Izzy found an Anchor probably from one of the many ships that have been wrecked on the the Bell Rock Reef, we also found some large Bollards which we reckoned were from the Argyll.  We didn’t see too much life other than juvenile Cod and Two Spotted Wrasse, overall an interesting dive and one to tick off the list; the highlight was being able to see the Bell Rock Lighthouse up close a feat of British Engineering. 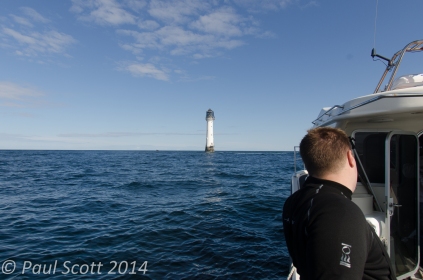 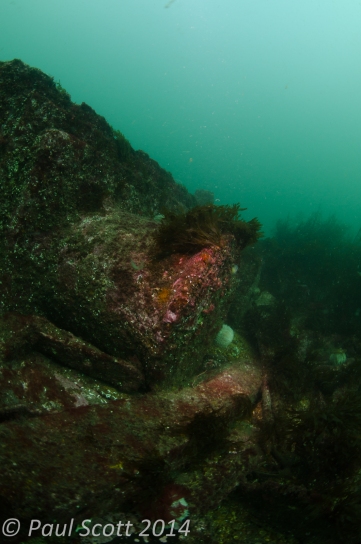 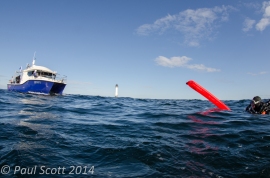