It’s a fact of life that the more you put in to something, the more you get out and this was very obvious at this months DTP at Loch Fyne. With the holiday season upon us and with other folk washing their hair Perth_BSAC provided the lion’s share of the instructor and people prepared to muck in and help out. Only fair really as we also took most trainees!

On what can only be described as a fantastic west-coast day with a flat calm sea, warm water and good vis the Perth club had three sessions running. Firstly a drysuit and buoyancy familiarization being led by Chirs and an Ocean diver completing his dive Leader lesson under Steve’s watchful gaze with another buddy pair practicing their navigation and buoyancy within the confines of the bay. One other pair from Dundee were undertaking Sports diver training under Edward Haynes’ watchful gaze. 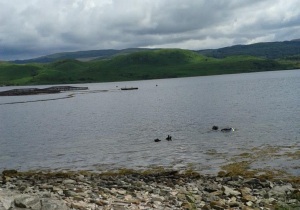 All the hard work was today rewarded with firstly a good session being completed covering drysuits and buoyancy culminating in two exploratory dives where the new skills were put into practice. Steve was set a hard task and asked to teach dive leading to a team consisting of an Ocean Diver and a Dive Leader trainee. By running the Dive leader sessions as examples of best practice our Ocean diver had some of the most comprehensive training for his grade possible. Well done to Steve for his innovative approach, clearly an Advanced Instructor in waiting ! Edward reported varying levels of success with his trainees who struggled with deco stops partly due in part to a poorly fitting drysuit and using skills no longer part of the BSAC syllabus and seldom practiced (never a good idea on an assessment). A greater emphasis will be seen here in upcoming months as BSAC reviews buoyancy skills in training.

All in all a very good event with some good diving and with a diver competing his Ocean Diver practical sessions, a very good result.

thanks to Maureen and Fred for the photos