A bright and frosty morning with snow covered mountains made for a delightful journey across to Tyndrum where we all met up for the onward passage to Cuan Ferry. Here we launched the club Rhib, checked her out and moved her to the steps where she was loaded with the dive gear.

‘The Bruce’ arrived and set about launching as we departed for Eilean Creachan, one of the islands at the mouth of Loch Melfort where interesting contours on the charts suggested some spectacular underwater topography. The dive plan was to put the first wave in to explore the wall on the northern end of the island and swim slowly southwards on the West wall.

Both groups surfaced reporting a very good dive with highlights being conger eels and two octopi as well a shoals of small fish. With virtually no tide or wind the boat didn’t move and although slightly cold it was very pleasant as we watched the divers bubbles. ‘The Bruce’ came alongside for a quick hallo and blether before heading off to dive around Shuna. Back with ‘Deep Dancer’ and having recovered the first set of divers the second wave went in and explored the foot of the wall initially swimming northwards, collecting a few large scallops from the mud between tall slender sea pens and finally ascending to following the top of wall back towards the boat. An old ‘Fenzy’ crack bottle was discovered and brought up for the amusement of the crew, some of who actually recognised it for what it was, before someone even admitted to having used one ! 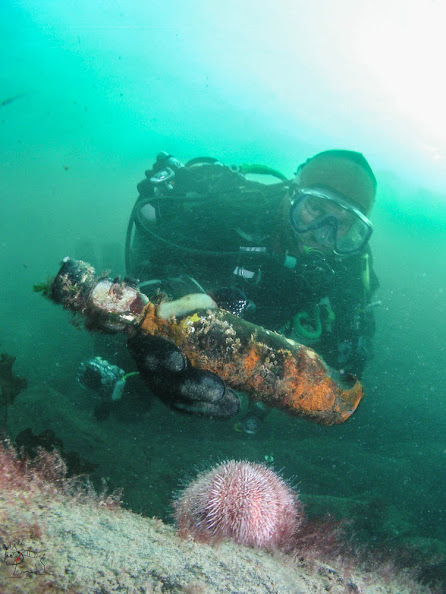 Lunch was scheduled to be taken at Shuna Cottage and Gary expertly drove us down to the southern tip of Shuna where we moored the boat, changed over cylinders and had our pieces. You can’t spend too long lunching with the short days so we were very quickly back in the boat and heading up the west side of Shuna for the next dive which turned out the be a cracker. 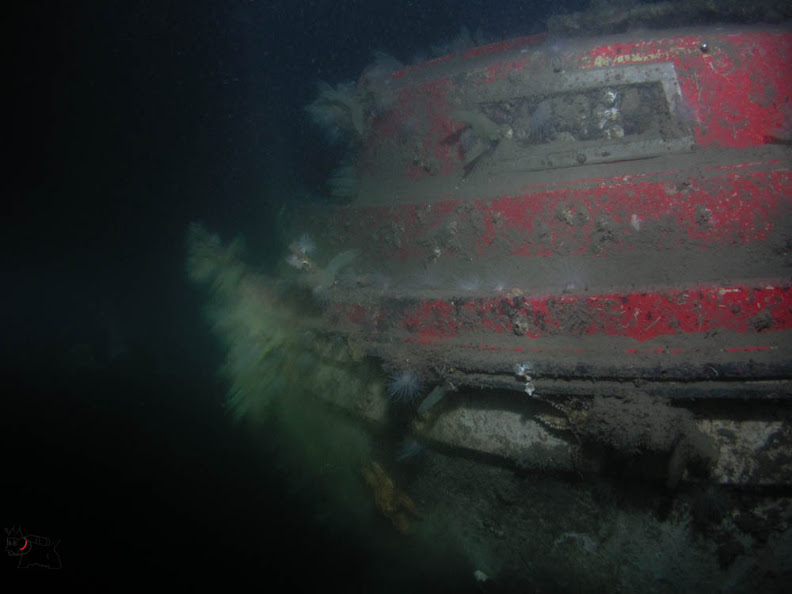 In went the pathfinders, closely followed by the backup team, each following a roughly parallel course swimming South. Ten minutes into the dive for some reason up pops a partially inflated DSMB and the two teams were seen to converge. What’s going on here then wondered the boat crew ? The conclusion that somebody had sent up a bag of scallops which had subsequently sunk seemed to describe the scenario so we marked the spot with a depth reading and a transit to the shore and quietly sniggered at the easy picking that would follow !(Why not the position fixing facility on the GPS/radio ? – ED) The teams then separated and continued their fin south. On surfacing they both reported good life, a few scallops and a wreck. Unbelievable, a wreck down here. But it was and proved to be a small pleasure craft lying upright in good condition with it’s rather rounded bows pointing into the shore and CQR anchor deployed. Probably about 9m long with a large cockpit, and cabins fore and aft. What a fantastic find and a great way to end the day.

On surfacing we quickly had the engine started and got back to the launch site with just enough time to recover the boat before it got dark having enjoyed a fantastic days diving.

Well done to Steve for organising a great trip and many thanks to Gary for towing the boat.

Paul has kindly placed some of his superb photographs here and they are well worth a browse.